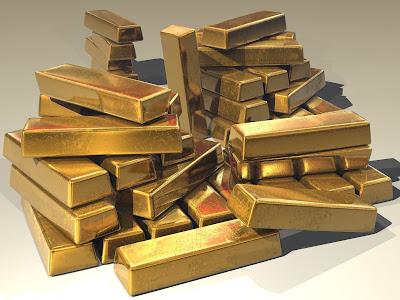 Gold has always fascinated peaple due to its scarcity but also for some other characteristics ,
such as that it never oxidizes .below you will find some less well-known facts about gold
campared to other metals ,gold is much softer .one can beat 1 gram of gold to a 1 square
meter sheet and light would shine through that sheet .very few chemicals can attack gold
so that ‘s why it keeps it shine even when buried for 1000’s of year .A total of eighty -eighty
thousand tons of gold have been extracted form earth ever since .this means all the gold
that has been dug up so far in history would ,if melted make a cube measuring approximately
25x25x25x meters 75%of all gold ever produced has been extracted since 1910 ,much of the gold mined throughout history is still in circulation in one form or another .gold is very rate compared with diamonds.
GREAT THOUGHTS
Q.1 CHARACTER NOT BRAIN WILL COUNT AT THE CRUCIAL MOMENT?
ANS :- RABINDRANATH TAGORE
Q.2 SOME MEN ARE BORN GREAT,SOME ACHIEVE GREATNESS,AND SOME HAVE GREATNESS THRUST UPON THEM?
ANS :- WILLIAM SHAKESPEARE
Q.3 EDUCATION IS THE CHIEF DEFENCE OF NATION?
ANS :- BURKE
Q.4 HE WHO FEAR YOU PRESENCE WILL HATE YOU ABSENCE?
ANS :- ENGLISH PROVERB
Q.5 PEAPLE GENERALLY QUARREL BECAUSE THEY CANNOT ARGUE ?
ANS :- G.K CHESTERTON
Q.6 GENERALLY OF THEORIES WE BELIEVE WE CALL THEM FACTS AND THE FACTS WE DISBELIEVE WE CALL THEM THEORIES?
ANS :- FELIX COHEN