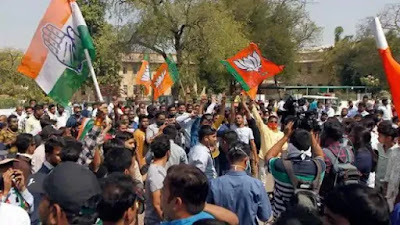 The counting of votes for 575 seats in 144 wards spread over six municipal corporations of Gujarat— Ahmedabad, Surat, Rajkot, Vadodara, Bhavnagar, and Jamnagar is underway. All these civic bodies are being currently held by the Bharatiya Janata Party. “Designated staff would begin the counting of votes from 9 AM on Tuesday at various counting centres in these six cities. People can watch live updates on fectguru. said MV Joshi, secretary, State Election Commission. As per the State Election Commission, 46.08 per cent voter turnout was recorded during polling, conducted on Sunday. While Ahmedabad registered the lowest turnout of 42.51 per cent, Jamnagar saw the highest turnout of 53.38 per cent, followed by Rajkot (50.71%), Bhavnagar (49.46%), Vadodara (47.84%), Surat (47.14%). Also Read – Surat Municipal Election Results 2021: BJP Leading on 47 Seats, AAP Ahead of Congress.