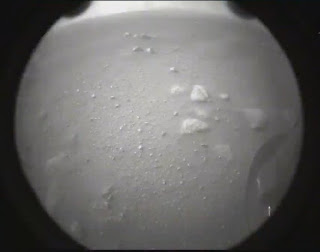 The National Aeronautics and Space Administration’s (NASA) Mars rover Perseverance landed on the red planet at around 02:30 am on Friday. This mission is extremely crucial to find whether life ever existed on the planet or not.

Almost seven months after its takeoff to Mars, Perseverance is the fifth NASA rover to touch the Martian surface after Sojourner-twin rovers Spirit and Opportunity and Curiosity.

Almost seven months after its takeoff to Mars, Perseverance is the fifth NASA rover to touch the Martian surface after Sojourner-twin rovers Spirit and Opportunity and Curiosity

NASA’s Mars rover Perseverance, the most advanced astrobiology lab ever sent to another world, streaked through the Martian atmosphere on Thursday and landed safely inside a vast crater, the first stop on a search for traces of ancient microbial life on the Red Planet.

Mission managers at NASA’s Jet Propulsion Laboratory (JPL) near Los Angeles burst into applause, cheers and fist-bumps as radio beacons signaled that the rover had survived its perilous descent and arrived as planned on the floor of Jezero Crater, site of a long-vanished Martian lake bed.

The six-wheeled vehicle came to rest about 2 kilometres from towering cliffs at the foot of a remnant fan-shaped river delta etched into a corner of the crater billions of years ago and considered a prime spot for geo-biological study on Mars.

The robotic vehicle sailed through space for nearly seven months, covering 293 million miles (472 million km) before piercing the Martian atmosphere at 12,000 miles per hour (19,000 km per hour) to begin its descent to the planet’s surface.

Is perseverance the first rover on Mars?

This is the first image NASA’s Perseverance rover sent back after touching down on Mars on Feb. 18, 2021. … The rover will characterize the planet’s geology and past climate, pave the way for human exploration of the Red Planet, and be the first mission to collect and cache Martian rock and regolith

Moments after touchdown, Perseverance beamed back its first black-and-white images from the Martian surface, one of them showing the rover’s shadow cast on the desolate, rocky landing site.