THE Bible is probably deeply steeped in astrological knowledge we don’t usually have. Doesn’t Virgo mean Virgin The lion, the bull, water-bearer, etc., are key biblical images. Animals with possible astrological associations float through prophetic books. Could there be an astrological design to the entire Bible? In Genesis 37:9, Joseph dreams “the sun and moon and eleven stars were bowing down to me.” For Philo, this meant that Joseph was “thus classing himself as the twelfth, to complete the circle of the zodiac. 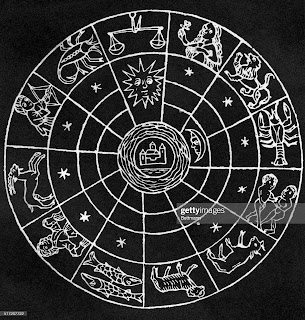 Biblical narrative might then indicate shifts in the zodiac? The number twelve, as in the twelve constellations, is certainly key to the Bible. We might think differently of everything from Jesus’ twelve disciples to the twelve tribes of Israel, etc.

Could the Bible be a kind of astrological allegory? Some have worked out systems of references. The Christian astrologer Carmen Turner-Schott here offers some basic references. It is believed that Jesus and Christianity started the Age of Pisces.

There’d be many data points needed to understand an ‘astro-theology’. The scholar Helen R. Jacobus, for example, notes the Aries of the Dead Sea Scrolls is represented not by a Ram but ‘The Lamb’

IS ASTROLOGY A SCIENCE

As many as 70 million Americans read their horoscopes daily. Well, that’s at least according to the American Federation of Astrologers. According to a study done twenty years ago by the Pew Forum on Religion & Public Life, 25 percent of Americans believed that the positions of the stars and the planets affect our daily lives. In 2012, the General Social Survey found that 34 percent of Americans surveyed consider astrology to be “very” or “sort of scientific” and also reported a decrease—from two-thirds to around one-half—in the fraction of people who consider astrology not at all scientific. ZEDIAC  SIGNS

Astrology is generally defined as the belief that astronomical phenomena, like the stars overhead when you were born or the fact that Mercury is in retrograde, have the power to influence the daily events in our lives and our personality traits.(AQUARIUS) This is, of course, very different from the study of astronomy, which is the scientific study of celestial objects, space, and the physics of the universe.

HOW TO I START LEARNING ASTROLOGY

Astrology is the study of the influence that distant cosmic objects, usually stars and planets, have on human lives. The position of the sun, stars, moon and planets at the time of people’s birth (not their conception) is said to shape their personality, affect their romantic relationships and predict their economic fortunes, among other divinations. ASTROLOGY FOR BEGINNER YOUTUBE

What most people know about astrology is their “sign,” which refers to one of the 12 constellations of the zodiac. This is a form of sun-sign astrology, which is the astrology upon which newspaper horoscopes are based. It is probably the simplest form, because nothing more than the date of someone’s birthday is needed to generate a sun-sign horoscope. Many astrologers will tell you that this form of astrology is so simplistic that it produces very limited results. what is my rising signs

How to find MY moon signs

To produce a more accurate reading, astrologers check to see what sign each planet was in at the time of birth. The planets and signs combine with other elements, such as houses and angles, to form a complex and often very specific profile of a subject’s personality, life and future prospects. There is no single unified theory or practice of astrology. Ancient cultures all practiced their own forms, some of which combined and evolved into today’s common western astrology. Eastern cultures continue to practice their own forms of astrology: Chinese, Vedic and Tibetan astrology are among the most well-known. Even within western astrology, there is a considerable diversity of methods and philosophies. Some divide astrology by the end result that is intended. Mundane Astrology – This is used to examine world events and make predictions about national affairs, wars and economies. Interrogatory Astrology – This branch can be further subdivided, but generally refers to astrology that seeks to make specific predictions or analyses about the subject’s objectives or events within the subject’s life. Natal Astrology  This is what most people think of when they think of astrology. Natal Astrology seeks to make predictions and analyses based on the date of a person’s birth. It’s based on the idea that everything that happens to something is expressed at the very beginning of that thing, sometimes known as the Law of Beginnings.

WHAT ARE THE BASIC OF ASTROLOGY / Divination

The best way to learn astrology is to study your own birth chart, and the birth charts of the people in your life. Many charts, especially those of the people closest to you, may not make a lot of sense to you at first, and that’s okay. They will make more sense in time. Just keep reading charts, learning, and observing. astrology for beginner PDF.

Eventually, you’ll move on to in-depth topics, like aspects, transits, progressions and composite charts. You’ll start comparing your chart to other people’s and learning the energetics of relationships. Still, don’t stop reviewing the basics: planets, signs, and houses. Every one of these symbols has multiple layers of meaning. The more you know, the better chart reader you will be.

WHAT IS ASTROLOGY AND ASTRONOMY

So you want to learn astrology– a symbolic language that describes the subjective human experience with seemingly miraculous depth and accuracy. Woot woot!! I’m so glad you’re here– and I’m here to help you. Have you ever studied a foreign language? Learning the planets, signs, and houses in astrology is a lot like learning a new language– a language of symbols rather than words.

As with any language, you can’t start with Shakespeare. First, you must learn the words, then the pattern that strings them together. Gradually, with practice, you’ll read and speak more “fluently” in this new language.

ASTROLOGY FOR BEGINNER BY B.V RAMAN